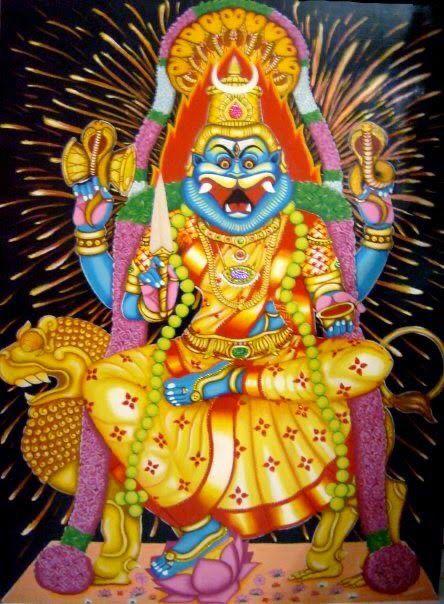 The Divine feminine that has been guiding us, I thought it was all about dressing up, chanting and offering prasad.

It’s also the Shakti of Maa (Bhadra) Kali and Maa Narsimhi (Pratyangira) – the shakti that destroys the “misuse” of feminine power. Let me explain through examples:

An old friend had been struggling with his draconian wife who had always been unhappy with him and constantly made him feel small about his earnings in front of the children. She often fell sick so that my friend would give her more attention. He felt he had to be there for the children. But once the children settled, he left the house. She then threatened him of dire consequences: “I will commit suicide”, “I will make sure you go to jail”, etc – an example of a mild miscreant.

However there’s another more dangerous form of women who misuse the power and authority given to them by their “unsuspecting spouse”. And, that is, by using dark occult for their own benefit- to control and manipulate in deceitful ways.

That happens to be the most treacherous form of trap; insidiously planned and executed by his unquestioned trust over the years. 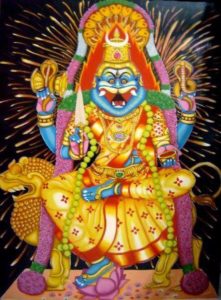 I am Narsimhi, the Shakti that gives force to Lord Narsingha (the lion avatar of Lord Vishnu). I am here to destroy that trap women use to control “My Children”, who have come here to serve the highest good for themselves and for others.

I will not tolerate women breaking loving and powerful “brothers” in conniving ways -creating walls between them -trying to wield power so that they can take control (practice of fractricide). I will rip their net, their trap, with my claws and my teeth. I will not spare them. But while I do my tandav (destructions) I will make sure that my children will be safe – for they have the grace of the Almighty. 🙏🏼

I will obliterate the dark force upon earth, for I am the fierce aspect of the goddess energy. And I am working alongside with Maa Bhadra Kali at this time of ascension of our Bhumi Devi (Gaia) 🙏🏼

My children, you have nothing to fear. If you ever feel scared you can chant my mantra. I will protect you.